There are really only two things about living in Russia that majorly and regularly bother me: the weather, and regressive cultural traditionalism.

I’m pretty sure that it will come as a surprise to absolutely no one that Russian society is deeply patriarchal, and for the most part, traditional gender norms are embraced by both sexes – with gusto. I am still having a hard time reconciling what seems to be the current standard for the ‘right’ kind of Russian woman – delicate domestic goddess eager to please her man – with the legacy of a country that enacted universal suffrage in 1917, boasted squadrons of female fighter-pilots during World War II, and sent a woman into space in 1963. 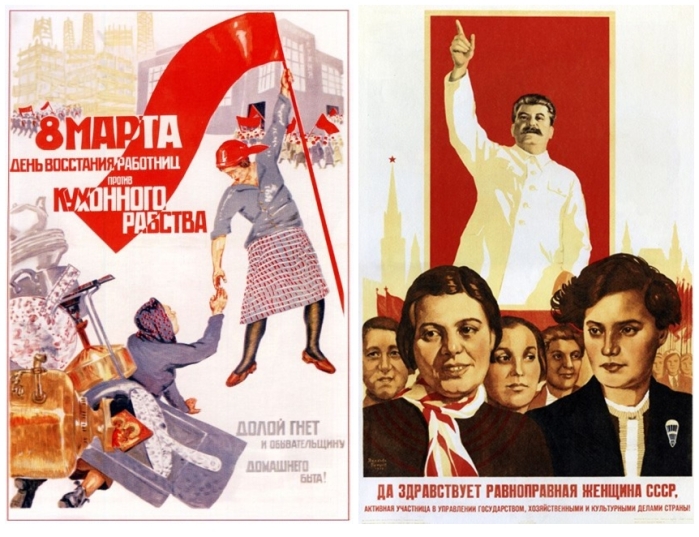 Soviet posters depicting the liberation of women from oppressive domesticity (literally “kitchen slavery,” on the left) and promoting their equal participation in the management of governmental, economic and cultural affairs of the country.

BUT. This is not a history lesson. This is about the present. It’s about the modern Russian society where 94% of women have secondary education and 56% participate in the labor force (roughly equivalent to the US indicator). Where the head of an international news network is a woman. And yet where sexism and patriarchy run rampant.

In the present-day Russia, I have been inundated with casual sexism and entrenched patriarchy on a very personal level.

It’s in the morning handshake between the male colleagues in my office, while the women get the nod and a ‘hello.’

It’s when the girls I barely know ask how many kids I, a single gal, am going to have and how soon, and what’s my deadline for getting married? And when I say, “Somewhere between zero and ‘open-to-discussion.’ And marriage is not something I put on my to-do list,” it is inevitably met with shocked faces and disbelief: “What are you talking about? EVERY woman wants marriage! EVERY woman wants kids! What’s wrong with you?! Who hurt you?! Just you see. Just you wait. It is your natural duty.”

It’s in the ‘jokes’ told casually at dinner parties, by both men and women. “If he beats me, he loves me.” Or “Если сучка не захочет, то кобель не вскочит,” which word for word translates as “If the bitch won’t want, then the dog won’t mount,” but means “if a man is having sex, it shows that the woman wanted it.”  Except – it’s not a joke if they believe it, like so many do. This blatant and rampant cultural endorsement of domestic abuse and rape makes my skin crawl.

It’s when I am asked if I am a feminist, and I respond with, “Yes, of course.” Men and women alike recoil in horror, as if I had just admitted to torturing kittens. (I don’t torture kittens, in case you were wondering. If anything, I am bullied by a small but vicious Pomeranian at home).

But I can’t just stop at ‘yes, of course.’  I have this visceral urge to preach.

Maybe it’s my 15-year immersion in East-Coast Liberalism. Maybe it’s being raised by a fearless alpha-female (my mom; more on that in a future post). Maybe it’s the obnoxious sense of cosmopolitan superiority that comes from being born Muscovite and coming of age New Yorker. Either way, I can’t help myself – and I don’t want to.

And nor should I have to, cultural relativism be damned.

When in Rome, do as the Romans do.

Don’t bring your rule-book to someone else’s monastery (Russian version of the above).

Ok, yes, it’s important to keep an open mind, to learn about and immerse oneself in, and respect other cultures. But open-mindedness so often morphs into cultural relativism. And that can be dangerous.

Cultural relativism excuses us from judging some of the most abhorrent cultural practices of foreign lands, many, if not most of them, harmful especially to women.

Girls having their genitals sliced up in Sudan? Don’t judge, that’s their culture. Mothers eat last in India? Don’t judge, you don’t understand their world. Women banned from driving, or being jailed for getting raped in Saudi Arabia? It’s for their own good and protection and respect, so stop applying your values to other societies.

Here in Russia, I can neither accept nor respect the ‘woman, even if she’s working full-time, has to be always pretty, responsible for the home and generally compliant, to keep her man’ part of the contemporary culture. Or ‘the man is always the leader at home and a woman must never emasculate him by asking him to help with the kids’ part. Or ‘it’s appropriate for male a cabbie to ask if you have a husband and kids’ part. Gender relations are handled differently here, but it doesn’t make this way the right way, or even an ok way, simply because of blanket cultural immunity.

So I speak out – against the rape jokes; against the assumption that because I have a uterus, it must be used for procreation; against everything else I am told is my obligation to be and do as a woman, like cooking or not drinking beer in public (seriously, it’s a thing. Women should be classy and drink wine or better yet, nothing, lest they be thought déclassé harlots, and then they will die alone).

I shake hands with my male colleagues. They used to nod and ‘hello’ me, like they do with the rest of the women in the office. So one morning I extended my hand – and got my handshake. And the next morning. And the next. The guys were bemused, at first, but played along. Then they asked – what’s the big deal? It’s just a tradition. It’s only a symbol.

Symbols are powerful. They don’t exist in a vacuum, but communicate powerful messages. That’s why there are laws against the depictions of swastikas in Germany and France. That’s why there’s a flag pin industry in the United States (though really probably in China).

A handshake is a symbol of many things – camaraderie, trust, respect, equity. When applied to a select group, it communicates that this group is more worthy of camaraderie, more worthy of respect. And the rest? Less worthy by default. Less equal. Which is bullshit. The bullshit that I want to fix one handshake at a time.

I can’t help but think that I am being indulged a bit – that a ‘real’ Russian woman saying these things would be treated with…I don’t know, ridicule? Scorn? While an American, or another westerner, a proper expat, would be told to ‘go home and stop forcing your foreign values onto our society.’

It’s not exactly fair. I’m lucky. I get away with a lot. In a way, I am enjoying double legitimacy, being a ‘real’ Russian yet still viewed by many as a foreigner. Sort of a non-threatening foreign curiosity.

But I’ll take my small victories any way I can get them, especially when I use my ‘superpowers’ for good – to at least try to take on the patriarchy and sexism around me. It’s not like I can do anything about the weather.

62 thoughts on “DOWN WITH PATRIARCHY: When in Rome…”