Comfort and protection from the Forces of Nature.

Sounds about right. Port pretty much saved my life in Crimea because…

I know I mentioned this before, but let me expound on the subject a bit. A month before I came to Crimea everyone was freaking out because the region was on track for its third record drought year. By the time I left the place had already seen the most rainfall in 12 years.

And guess where I got caught in yet another torrential downpour? In literally the driest area on the peninsula.

Ok, so. Having been rained out of riding trips, a hike up Mount Ai-Petri and down Crimea’s own Grand Canyon, and visits to two thirds of Yalta’s palaces because of the mudslides and rock falls and general apocalypse and whatnot, I had no choice than to explore closer to the home turf.

The village of Novy Svet, where I was staying, stands at the point where the famed South Coast of Crimea ends, and East Crimea begins. Up to that point all of my explorations took place north or west of Novy Svet. So off eastward I finally went.

A half-a-day-trip to the townlet of Koktebel (“land of blue mountains” in Tatar) promised to be a fun and relaxing experience. About an hour drive down the serpentine roads through vineyards and rolling hills, followed by an hour and a half boat ride past Mount Kara-Dag (exploded volcano) to the Golden Gate (East Crimea’s calling card) where we’d go for a swim in the 30-meters-deep waters, followed by the tasting at the best winery in the region.

The day promised to be picture-perfect: 25C, sunny, with a light breeze.

Right up to the point when we pulled up to the docks.

Heavy, menacing – though dramatically beautiful – rain clouds appeared virtually in the span of minutes. This, in the area that we just learned was a desert and the most arid spot on the entire peninsula, seeing minimal precipitation throughout the year and practically none in the summer. The clouds had to be purely decorative, right? RIGHT?

Nope. Five minutes after our little group had set sail, the heavens opened up and … you get the idea. Within three more minutes that it took our crew to distribute plastic tent-coats we were all thoroughly soaked. Then the seas got rough. It was impossible to stand up and move around – not that there was anywhere to move around to, really. So our little gang just went with the rough flow, so to speak, joyfully photo-documenting our misadventure while our captain kept on narrating the history and legends of the ancient volcano and the land around it.

By the time we made it to the Golden Gate there was very little Golden about it, though it was beautiful nevertheless. 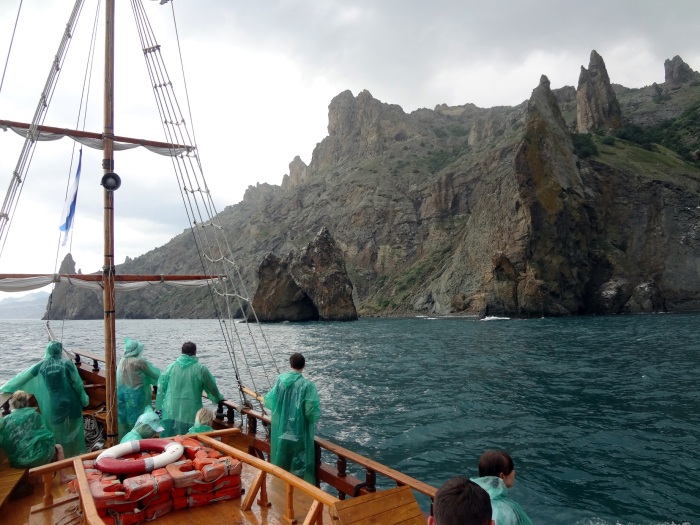 The captain then asked who wanted to go for a swim. I was rather surprised that only four of us – out of a group of 15 – said yes, as we were all wet anyways. Two minutes later I was wishing that I had been one of the smart eleven.As soon as I jumped into the Black Sea waters, it got scary. Really scary. I’m cool in like, a pool, or a deep puddle, but in no universe am I a proper swimmer. Which is what you had to be to avoid getting thrown and slammed into the side of our boat by the really big waves that did not look nearly as big from the boat.

I made several attempts to lap away from our vessel into more open waters, where my only worry would be coming up for air, before realizing that this was all a VERY BAD IDEA. I let the next wave carry me back toward the boat, and before the next one rolled up I made my way to the ladder, at which point two crew members hoisted me back on board.

That was the moment when I felt the most grateful to be traveling alone, as there was nobody of my acquaintance to see me in my saddest, flabbiest, bedraggledest, breathlessest, pathetic-wet-cat-est moment. 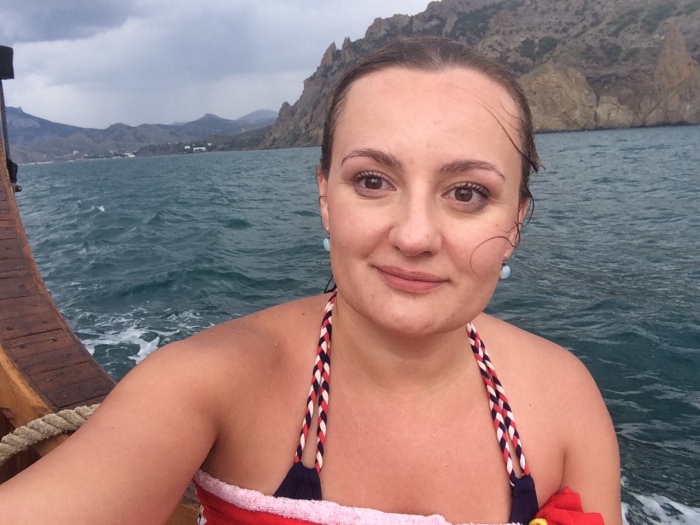 Funny enough, that was the moment when the storm decided to easy up and allowed bits of sunshine to comfort my sorry ass.

We were all so happy about the sun that everyone who did not go swimming immediately took off their protective rain gear. Another two minutes, and it was pouring rain again. OF COURSE. All the way back to Koktebel.

I didn’t even bother to put my clothes back on. Hanging my purse, stuffed with gadgets, around my neck, I pulled the plastic rain tent over my head and, violent bursts of rain hitting my face and all, schlepped across town to our tour bus barefoot. By that point my thirst for #adventure was long gone, and I wanted to curl up in a ball somewhere and die in peace.

Because of the six wines we tried on our way out of Koktebel, that was the one to bring me back to life.

I bought 300 ml more of this light, fruity, slightly tangy, potent and magical concoction in the “to go” cup for the ride back to Novy Svet. I swear it’s the only reason I am still with you. 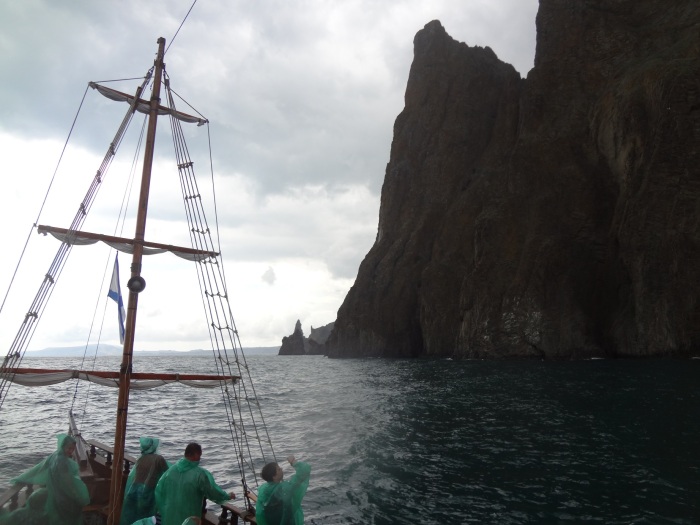 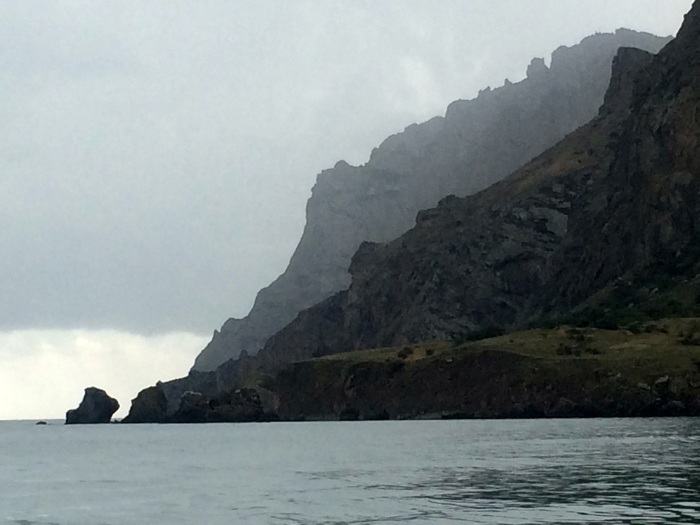