Paris, city of light and love, of D’Artagnan and Jean Valjean, of escargot and Le MacDo.

Paris, the ultimate destination for millions of people around the world.

Enjoying a crème brûlée in the Latin Quarter my first week in Paris, August 2003.

Paris has its own mythology.  It is the setting for hundreds of world-renowned tales, from the Three Musketeers to Amelie. Its sights are iconic: the Eiffel Tower, glass pyramids in front of the Louvre and Da Vinci’s Mona Lisa inside it, Arc de Triomphe at the top of the Champs Elysees, Notre Dame’s gargoyles, the Moulin Rouge cabaret…

This imagery is heightened by the unmistakable ‘Frenchness’ of it all. When one thinks of Paris, one also imagines the smell of fresh baguettes and moldy cheeses, the sound of an accordion, the glint of light on a wine glass at a sidewalk cafe, the impeccably chic French people passing impeccably chic storefronts. You almost don’t need to set foot in Paris to get a Paris sensory overload. Just close your eyes for a minute and think about all the things I described. Whisper the name out loud, in a French accent: Oh, Paris…

I was one of those people who had totally bought into the idea of Paris based on books and postcards. I dreamed of getting lost in its charming neighborhoods, discovering charming cafes only known to the locals, being charmingly flirted with by a charming Frenchman while I quietly contemplated the enigma of Mona Lisa in the half-empty corridors of the Louvre. I fell in love with the city years before setting a foot there.

Then I came to Paris.

Top right, in a Rolling Stones t-shirt and olive wool trench. It was a weird sartorial phase for me >.<

I have never encountered mass tourism until I arrived in Paris. Sure, there are always tour groups roaming the Kremlin, and out-of-towner crowds swarming Times Square. But they are fairly contained, easily avoidable and do not compare to the full-on foreign invasion that overwhelms the French capital.

Paris is small. It has an outsize image of a world-class capital city – which it is, in many ways – but it is less than 1/12th the size of NYC, 1/15th the size of London and nearly 25 times smaller than Moscow. All those historic landmarks, famous museums and iconic cafes are cramped into a tiny space. And that space receives 18 million visitors a year – more than 8 times the population of Paris!

Paris does not belong to Paris. Not on the novice take, anyway. Paris of my – and probably millions of others’ – romantic dreams had been overtaken by the world.

And although this city has become even more touristy and more crowded since my first visit, it was already a madhouse back in 2003, when I landed there for my ‘study abroad’  as a naïve college student.

The moment I arrived, before I had spent a centime on anything, I felt that this was a city I could not afford to even be in. Apartment buildings that looked downright palatial. Impeccably dressed men and women everywhere. Glitzy storefronts. Literal gilded domes.

Even quintessential Parisian experiences, like people-watching from one of those colorful wicker café chairs with a crème brûlée and a glass of wine (bill – 10 Euros) were out of reach on my student budget.

Paris was designed to make you want the finer things. Every day the city was rubbing in my face all that I could not have.

To add insult to injury, homestay assignments through our program were random, and my equally financially challenged roommate, Lyudmila, and I were placed at a home-stay in a literal penthouse in one of the poshest neighborhoods (Place de Breteuille, in the 7th arrondissement). There wasn’t a cheap crêpe stand in sight. For four months we lived on grilled chicken breast and tomato with lettuce salads.  We would split a large coffee macaron from the downstairs bakery when we wanted to treat ourselves. Our evening entertainment was watching Star Academy or one of the 50 movie DVDs that my American boyfriend burned for me before I left. On weekends we simply walked around different neighborhoods, with a shared baguette. 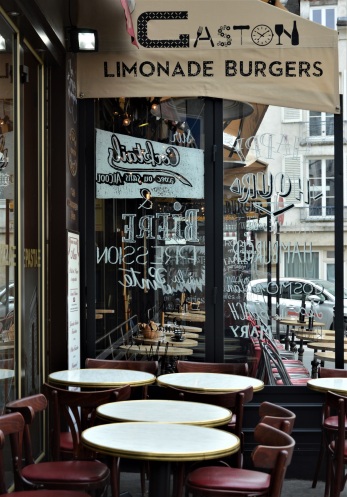 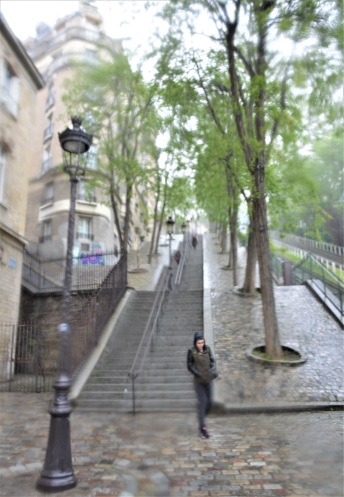 A record-setting, stifling heat wave of late August and early September of that year was replaced overnight with an almost equally unprecedented, cold, wet and gray fall. This did nothing to lift my spirits or appreciation of the city. Three-hour-long classes on New Wave cinema and existentialist philosophy were tedious for someone excited by economic charts and policy debates. Our student group didn’t really gel. I was yelled at by an old cranky Brit for “ruining his language” because I, a Russian!, spoke with an American accent. A month into my semester abroad I was ready to quit the program and leave Paris.

I didn’t. Firstly, because I didn’t have the resources to be so petulant and frivolous with my self-funded education. Secondly, because Lyudmila turned out to be the most incredible companion. We got along perfectly and did everything together. For some inexplicable reason, just as I was wallowing in my misery, she was falling in love with everything about Paris and France, and trying to get that affection to rub off on me (I still remember how she would exclaim “Les pompiers!” every time we would pass a fire truck). 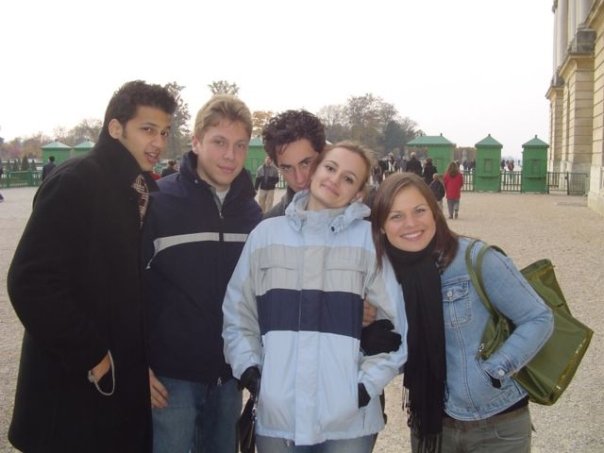 In Versailles with Lyudmila and friends from London.

I stuck it out the rest of the term, lost 20 lbs on my “Parisian student budget” diet and learned the city like the back of my hand by walking tens of miles of its streets every weekend. I stayed in dirt-cheap hostels on the Côte d’Azur and blew a month’s worth of discretionary budget on a taxi ride from Rennes to le Mont-Saint-Michel after fucking up the schedules and missing the last bus. I drank cheap Alsatian beer and failed to learn any French.  I read and reread Stanley Karnow’s “Paris in the 50s” and imagined that I was in fact visiting that authentically Parisien world.

Being the perfect roommate that she was, Lyudmila insisted on accompanying me on my late December ride to the airport, to help me with luggage. We drove by the Eiffel Tower – its black silhouette barely sticking out against the inky pre-dawn sky. Lyudmila was crying – she was missing the wretched thing already, even though she had several more days in Paris before returning home for the holidays, and even though she was coming back to Paris just a few weeks later. Yes, she had fallen in love with the city so much that she had extended her study abroad there for a second semester.

I didn’t want to even look up at that iron monstrosity – the symbol of my four months of misery. 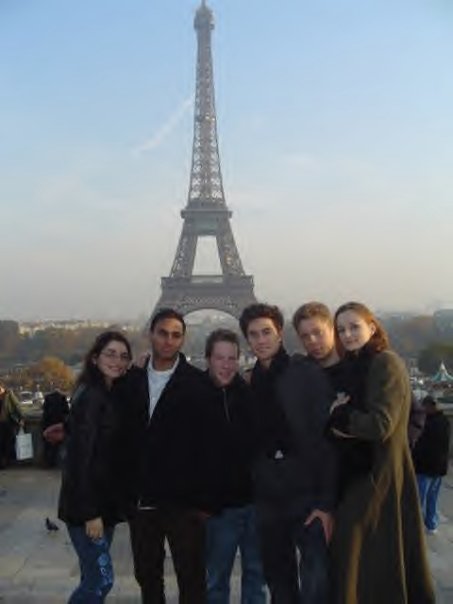 It would be more than 12 years before I returned to Paris.

It was a last-minute work trip; I was standing in for a colleague who suddenly took a temporary leave.

On the taxi ride from the airport the city was slowly coming back to me familiar, with small details more evocative than the world-famous landmarks. Blue corner-building plaques denoting which arrondissement you were in. Menus scribbled on blackboards outside of cafés. Wrought-iron balconettes. Old lampposts. Red awnings.

The Eiffel Tower, sparkling against the inky late-evening sky, seemed remote and foreign; I might as well have been watching a National Geographic Paris special. 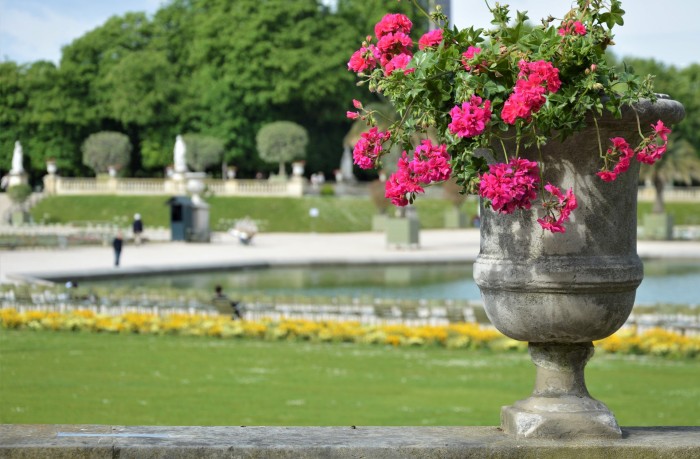 My work schedule had a window of several hours between events, and, almost reluctantly, I ventured out into the city for a walk.

I found myself ambling without thinking about directions or street names, without the need for Google Maps. My legs drew the itinerary as if from muscle memory, taking me from one of my favorite spots to the next. The Medici Grotto in the Luxembourg Gardens. Place de la Contrascarpe in the Latin Quarter. Voie Georges Pompidou, opposite Île Saint Louis – my favorite view in Paris. The stairs of Montmartre.

Within a couple of hours I crossed half of Paris on foot. I had bought a coffee macaron from my favorite bakery in the Marais, tried on a blouse at a tiny vintage dress shop and browsed postcards from the bouquinistes along the Seine. I had a glass of wine (ok, two) while sitting in one of those colorful, street-facing wicker chairs.

Paris was not so bad.

Since then I have been to Paris six more times. While I regularly holiday all over France, most of my Paris trips are for work. If I want to enjoy the city in my few spare pockets of free time, I have to approach it with a particular efficiency. That does not mean that I try to cram in maximum sightseeing during a lunch break. On the contrary, it often entails slowing down. Leisurely sipping rosé somewhere with a great view. Popping my head into a small museum.  Having dinner somewhere utterly fabulous. Indulging in Paris.

Paris remains as posh, glitzy and as expensive as ever, but it feels more accessible now. Even though usually I spend little – some cheese here, some Christmas ornaments there – just knowing that I am now able to comfortably afford a slice of Parisian life makes me enjoy the city that much more. With every trip the city somehow seems more beautiful than ever.

I avoid the crowds through careful scheduling and advance planning. If it is impossible – inside my beloved Sainte-Chapelle or around Notre Dame, whose towers would offer my favorite birds-eye view of Paris before the fire – I tune them out. I now navigate Paris though a sort of a picture-editing tool, the kind that removes all the pesky tourists in photos of famous landmarks to make them Instagram-ready.

I enjoy showing the city to my companions, drafting itineraries for friends going there for the first time and trying to find whatever “off the beaten path Paris” there might be left.

I am not saying that I am now in love with Paris, or that it has finally become the city of my sanitized romantic fantasies. But I now look forward to going to Paris. And I really, really like it when I do. 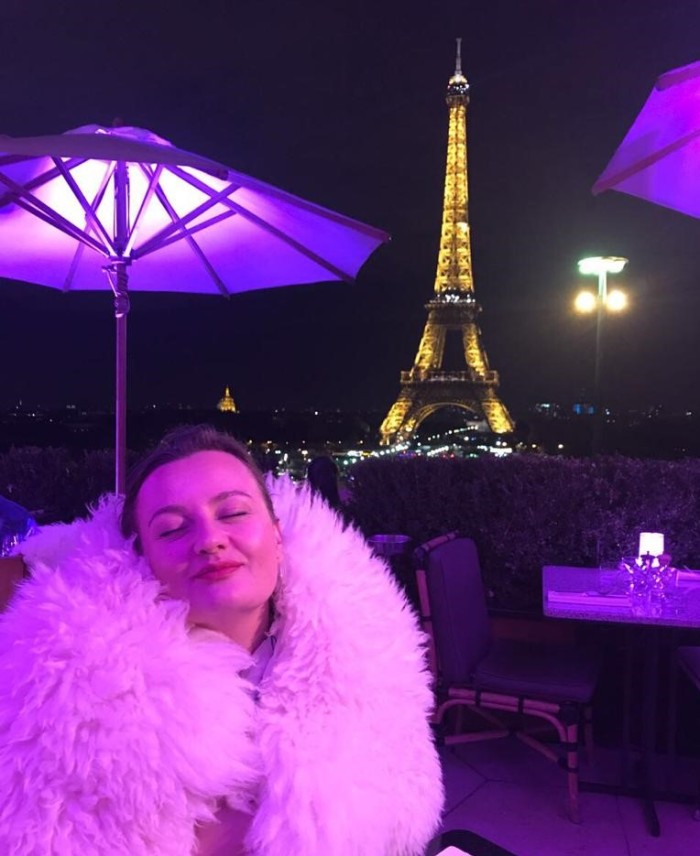 10 thoughts on “On loving and hating Paris”