Moscow is an incredibly green city. It has 120 parks in total – 120!!! – and the whole 20% of the Central district is taken up by park spaces. A week doesn’t pass without me taking a walk in a park, no matter the time of year. With so many to choose from, there is one park that stands out above all others: Kolomenskoye.

Kolomenskoye, located on the bank of the Moscow River in south-eastern Moscow, is a former royal estate. The Ascension Church, finished in 1532 and dubbed The White Column, is one of the most unique examples of Russian ecclesiastic architecture. In the 1600’s, Alexey Mikhailovich – the 2nd Romanov tsar and father of Peter the Great – had a whimsical wooden palace built there for him, 270-rooms large. The area around the estate was all villages and hunting grounds, before becoming a public park in the 1920’s. Kolomenskoye was designated a UNESCO World Heritage site in 1994. At 390 hectares, it’s about 15% bigger than New York’s Central Park.

I grew up not too far from Kolomenskoye and spent countless weekends and holidays on its grounds, falling more in love with it each time. To me, Kolomenskoye is THE perfect park. Through all my travels I have not encountered a lovelier space. It is the place I love in every season and any kind of weather, one that suits any kind of mood I might be in. Here are 10 reasons why Kolomenskoye is amazing, and why you must visit it if you are ever in Moscow:

Nature rules at Kolomenskoye. It’s not just some trees in-between all the cafes, fountains and fairground rides. Sprawling green spaces dominate, and there are plenty of spots for quiet strolls through the orchards, hikes up unpaved foot trails, or a nice picnic by the stream. In other words: a real getaway from the hustle and bustle of Moscow.

2 Nature at Kolomenskoye is very diverse, as is the landscape.

Kolomenskoye is covered with wildflower meadows, apple orchards, and birch and maple groves. The park showcases Russian nature at its finest year-round. And while Moscow is mostly flat, Kolomenskoye is anything but. Deep ravines cut across the park, and steep hills rise above the Moscow River to offer wide, beautiful views of the city and the valley.

3 It is close to the Center yet not crowded. 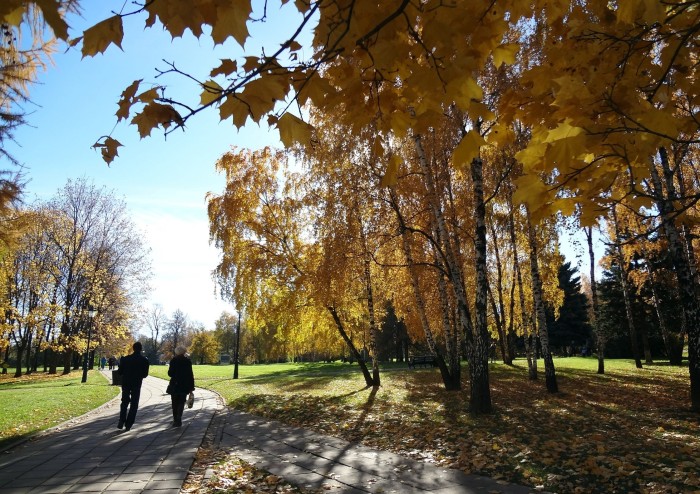 Kolomenskoye metro is just two stops away from the Circle line that delineates downtown Moscow, and four stops from The Kremlin. But perhaps because it’s not chock-full of amusement rides, bike rentals, skating rinks and restaurants (I’m looking at you, Sokolniki), it is also not chock-full of people — even in peak season.

4 It strikes the perfect balance between wilderness and civilization.

There is actually plenty to do at Kolomenskoye aside from hiking. There are exhibits and concerts, markets and souvenir stands, pony rides and an amusement park that is open during the warm months. It’s just that most activities and facilities are grouped along the perimeter of the park, leaving the nature in the center undisturbed, just to be enjoyed. Perfect.

5 Seasonal activities are simply the best.

In the winter, the steep hills going down to the Moscow River become perfect slopes for sledding, tubing, or just sliding on your butt at break-neck speeds for hundreds of yards, attracting kids and adults from all over the city. Kolomenskoye has one of the biggest, if not THE biggest, apple orchards in Moscow and in springtime apple blossoms are an incomparable sight (plus there are endless rows of tulips, lilacs, cherry blossoms and more – take your allergy medicine!). Summer brings about boat rides on the river and horse rides across the rolling hills. And in the fall you must make your way to the Honey Fair to taste hundreds of varieties of honey from all over Russia and pick some of those apples from the orchard!

6 The museums and exhibits are some of the most unique and “Russian” that you’ll find in Moscow. 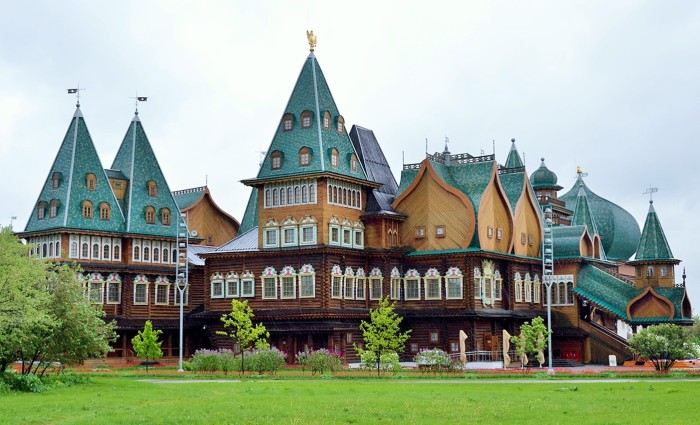 First of all, the entire complex is a historic and architectural landmark and a Moscow Must See site. Start with the unique Ascention Church (the gorgeous White Column), then walk along the river to the reconstructed palace of Tsar Alexey Mikhailovich to see how the Russian royals lived in the 17th century (spoiler alert: they were fond of red and gold), and complete the park loop by checking out special exhibits dedicated to traditional peasant celebration of major holidays, from Christmas to Easter and Trinity (browse the list of current Kolomenskoye exhibitions here, even more on the Russian version of the site).

Sure, there are hundreds of churches in Moscow, but most of them are cramped between residential or office buildings on crowded city blocks. At Kolomenskoye you can take in all the beauty of a Russian church in a gorgeous natural setting, and observe the evolution of the architectural styles through several centuries. Aside from the White Column, Church of the Beheading of St. John the Baptist is a particularly rare and remarkable example of a medieval Russian “tented” church. St. George Church is made entirely out of wood, and Church of the Kazan Icon of the Mother of God dazzles with ancient icons and relics. 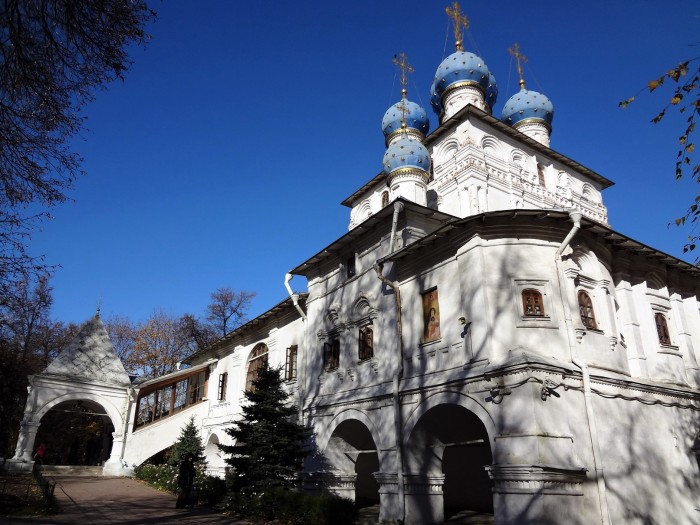 Fun fact: Kolomenskoye village survived on the park land until the 1980’s. The folks inhabiting the place purportedly descended directly from the serfs of Tsar Alexey Mikhailovich. That village is no more; yet, there are several traditional village homes with gardens, a horse farm and a working apiary (bee garden) on the grounds of Kolomenskoye. If you want to glimpse Russian country life but don’t quite have the time for a day-trip to Suzdal, Kolomenskoye is just the place to do it.

9 There is plenty of delicious Russian food.

Near the entrance to the park is an area called the Market Street. Its defining feature: a row of traditional Russian village houses that are, in fact, restaurants in disguise. Here you will find all the traditional and adopted Russian food your heart might desire, from bliny with caviar to shashlik (kebab). And to drink? You’ve got beer, mulled wine, kvas and mead galore. You can stick around and have a civilized lunch at one of the cafes, or grab some goodies to go for a picnic on the grass. Whenever I plan to go to Kolomenskoye I deliberately do not eat beforehand, because I cannot imagine a visit without a hot pork shashlik and a cold pint.

The Golosov Ravine that meanders through the park is supposedly a portal into another dimension. If you show up at the right spot at the right time, you could cross over into other worlds, and strange creatures FROM those other worlds are told to have popped into ours. What other park in the world can boast THAT? 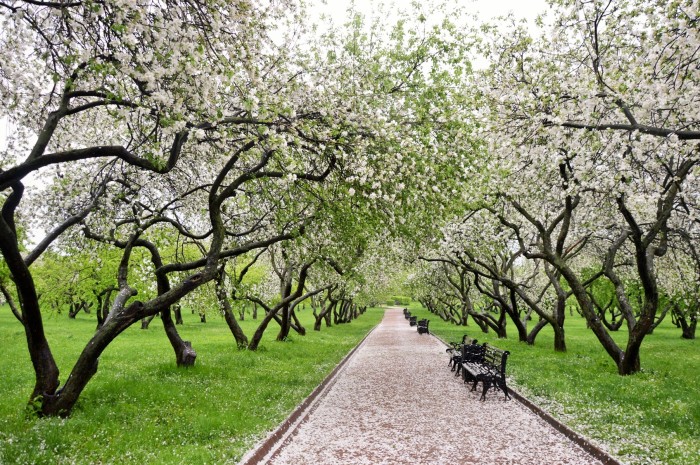 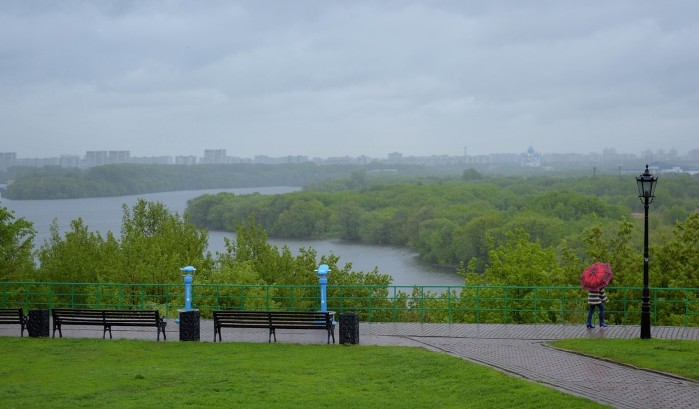 See more of Kolomenskoye on a sunny autumn day and in very early spring.

27 thoughts on “MOSCOW WALKS: WHY KOLOMENSKOYE IS THE BEST PARK IN THE WORLD”