Not what you expected to see? 😉  Me at VDNKh during a much warmer time of the year.

VDNKh is one of those Moscow places I do not particularly enjoy yet keep going back to over and over for various half-baked reasons.

What is VDNKh? Good question. Vystavka Dostizheniy Narodnogo Khozyaystva, (Exhibition of Achievements of the People’s Economy) is Moscow’s enormous exhibition complex and is one of those grand Soviet relics that seems more like a fictional set piece than a real place. VDNKh was constructed in the 1930’s to showcase the agricultural achievements of diverse and multinational USSR. In the 80’s and 90’s many of the buildings have fallen into disrepair from neglect, but since then VDNKh — now renamed as VVTs (Vserossiyskyj Vystavochnyj Tsentr = All-Russian Exhibition Center) — has been resurrected as one of the top recreational complexes in Moscow.

For my taste, the place is overstuffed. The complex is larger than the entire principality of Monaco. There are roller coasters and amusement rides, ponies and carriages, mini-trains and rickshaws speeding around, countless eateries, popcorn and cotton candy stands on every corner, fountains and monuments, and several dozen pavilions housing everything from historical exhibits to fur shops. Oh, and thousands of people, particularly children, congregate there every single day.

In wintertime VDNKh also adds a giant ice skating rink to the list of its attractions. It was that rink that brought me back to VDNKh this time around. A friend told me that is was absolutely spectacular this year, and I absolutely must see it. Now, I don’t skate or generally engage in any sports that require tricky things like balance. BUT. I am easily seduced by all things pretty and especially “spectacular,” because they give me a chance to whip out my new fancy-cam and take a few hundred shots for the blog.

Looking to incorporate some kind of exciting activity into my outing, besides just snapping photos, I decided to ride the Ferris wheel that’s right at the entrance to park. Fun fact: the wheel is called Moscow 850, and constructed to mark the 850th anniversary of Moscow in 1997, and at the time was the tallest Ferris wheel in Europe.  Ticket clerk asked if I wanted an open and a closed cabin. Thinking that the “opened” version is just like it’s closed cable car-like counterpart just without plexiglass in the windows, I went for that option — clearer photos and all that.

Boy, were they ever. Because this is what my “cabin” looked like when it rolled up: 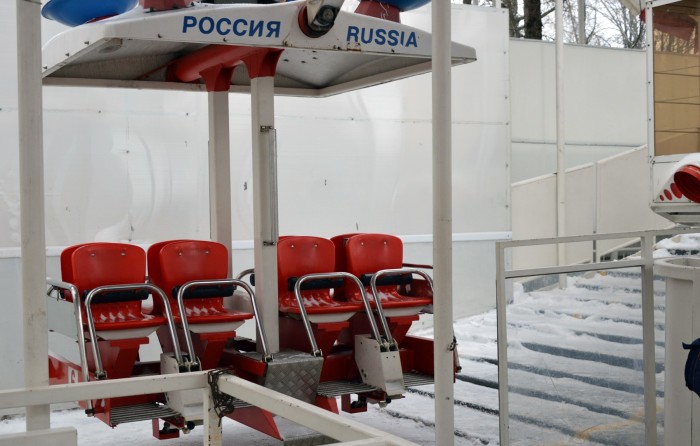 Did I mention is was -10C, snowing and windy as hell? Well, it was. I was perched up 230 feet above ground on a little plastic seat with nothing but a metal bar in my lap holding me in place while bursts of wind violently shook the wheel and piles of snow flew in my face. Brilliant.

For the first couple of minutes I weighed the pros and cons of screaming, but by the time I decided that I really wanted to get down NOW I was way too high up and it looked like screaming wouldn’t expedite the process. So I started taking photos instead. 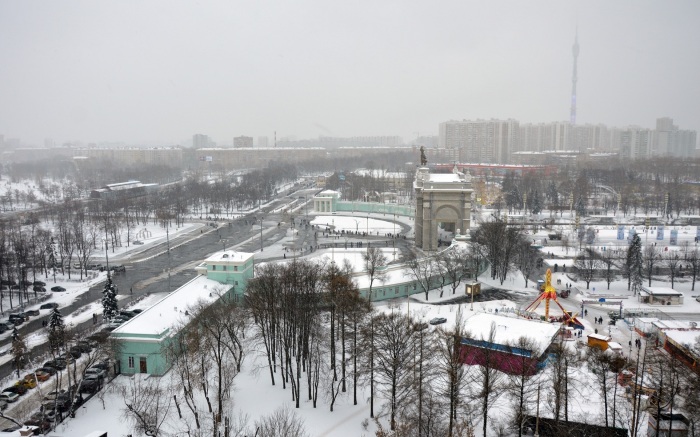 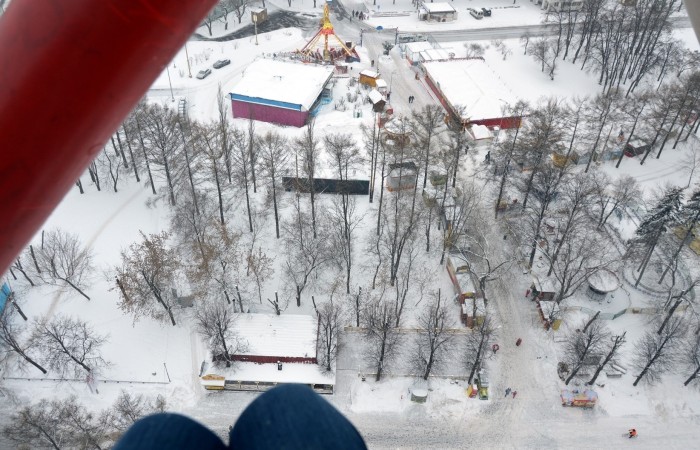 Below are some more photos from my wandering around VDNKh (including some from past summers).

Though I am not an ardent fan of the place from the recreational point of view (too noisy, too many kids, and not enough green space), it is really fascinating from the historico-cultural one. First of all, it oozes communist glory days, with USSR regalia everywhere and even a statue of Lenin at the end of the main alley. It is a little disorienting to see palatial pavilions dedicated to regions of Russia — like Karelia in the north — alongside those of the former Soviet republics, like Armenia and Ukraine, which for most of my life had been separate countries.

Another element that I love is the over-the-top agricultural theme. Statues, buildings and fountains are dripping with painted and carved fruits and vegetables, fish and livestock, pine cones and flowers. And of course the happy and proud Soviet collective farm workers tending to all this nature’s bounty! Very much “a feast for your eyes.”

The entrance and the main alley of VDNKh

Even the street lights are shaped and gilded like grain stalks. 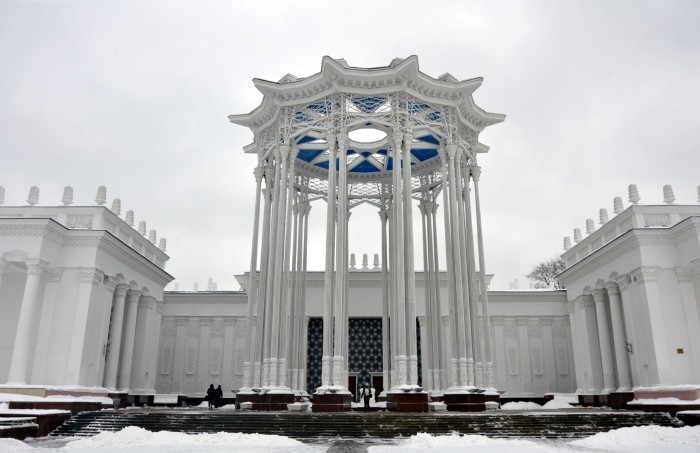 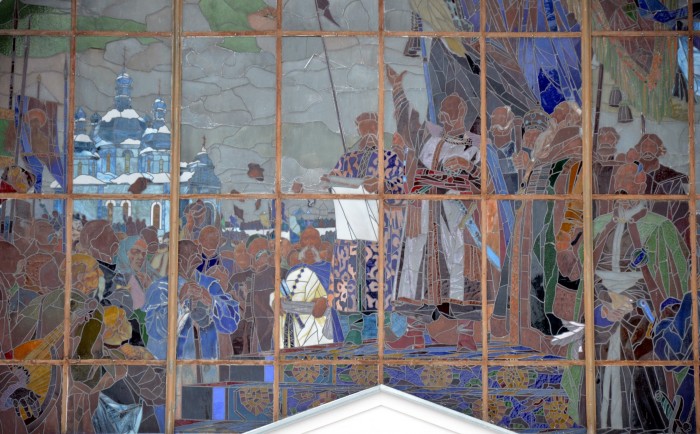 The fountains in particular are probably some of the most unique you’ll encounter anywhere in Europe, including “the Stone Flower Fountain” and “the Friendship of the People Fountain.” 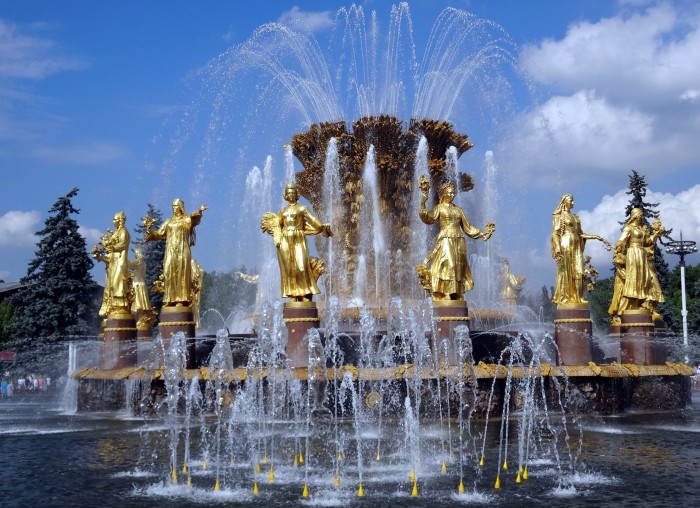 …and some more VDNKh amusements, out and about and all around… 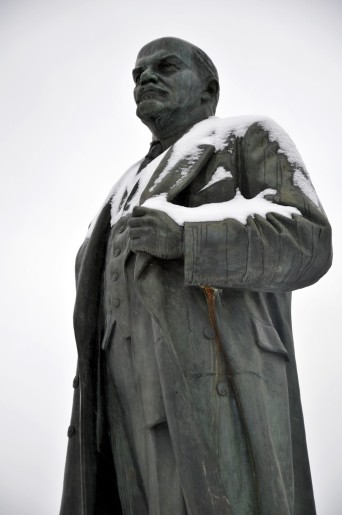 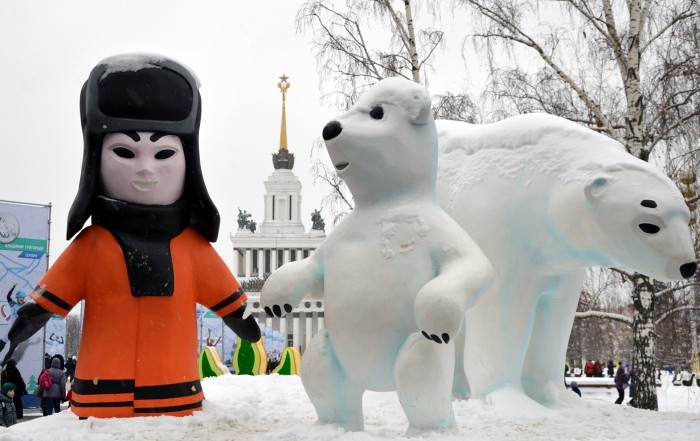 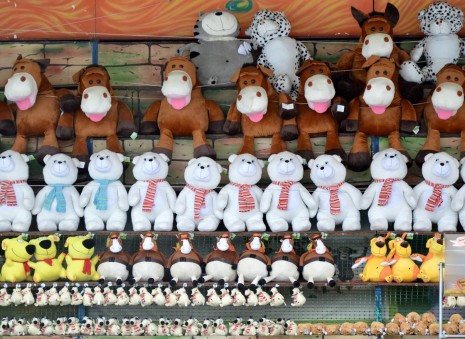 PPS I now have a new half-baked reason to return to VDNKh: while writing this post I Googled the map of the complex and realized that at most I have walked through a third of it. Brace yourself: next VDNKh post is coming up soon …. well, maybe in a year or so  😉

27 thoughts on “On the Edge of My Seat at VDNKh”