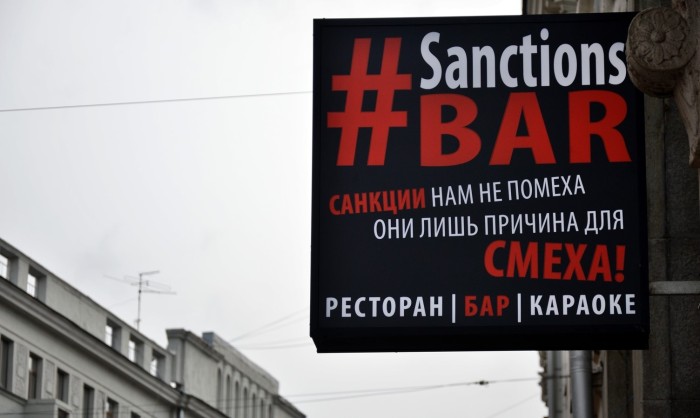 That’s right, I have lived through my teens and 20s without ever going on a pub crawl. Granted, I have crawled out of my share of bars and pubs across the United States and Europe, but I’ve never imbibed in more than a couple of establishments per night, preferring stationary hang-outs to hit-and-runs. As a matter of fact, I have only discovered the term “pub crawl” within the last couple of years, when I started reading travel blogs and found out that this is something the kids do nowadays.

Funny enough, I had totally forgotten that I was going on a pub crawl when I showed up to my latest Moscow Bloggers & Readers get-together, so it came about as a very pleasant surprise. This is where I have to say thanks to Eva, who had organized this shindig. The key to a happy pub crawl is the availability of multiple drinking establishments in close proximity to one another. Being a stationary drinker myself, I had never paid particular attention to the concentration of watering holes in any given area. Considering that Moscow’s entire bar scene is still in its mid-20s, I am giving major props to Eva for picking a great itinerary for getting our drink on. Without further ado….

I was really excited to learn that we would be congregating at the #Sanctions Bar, the existence of which I was not aware of until that point. But what a great concept, right? Take something that’s very current, very of-the-moment (West-Russia-West sanctions in response to the Ukraine debacle), and capitalize on it in a tongue-in-cheek manner. I was expecting a Russian version of Freedom Fries (Putin Potatoes?) and witty, patriotic cocktails, say…Cranberry Crimea?

In reality, #Sanctions Bar is a typical Moscow establishment that invests piles of cash into prime real estate and kitschy décor just to phone it in when it comes to food and drink. The bar menu has such creative gems as Gin & Tonic and Long Island Iced Tea; dinner menu offers cream cheese-heavy sushi rolls alongside Georgian khachapury and Chicken Caesar Salad. There are literally hundreds of nearly-identical menus all over Moscow.

#Sanctions seemed like an opportunity wasted – and too bad, because the interior, with a chandelier made of (fake) Euros and artwork celebrating Putin’s triumph over Obama and Jen Psaki, set the right kind of cheerful, cocky ‘we ain’t afraid of you!’ mood. Oh well. Once the drinks started flowing, it didn’t matter what they were called – it was just the beginning of a long, awesome night. 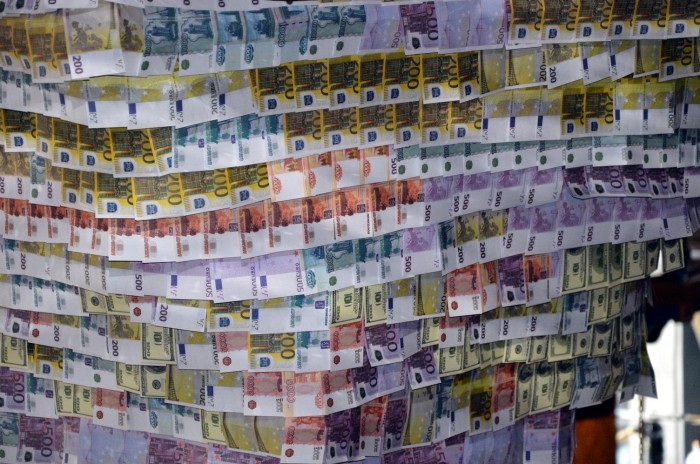 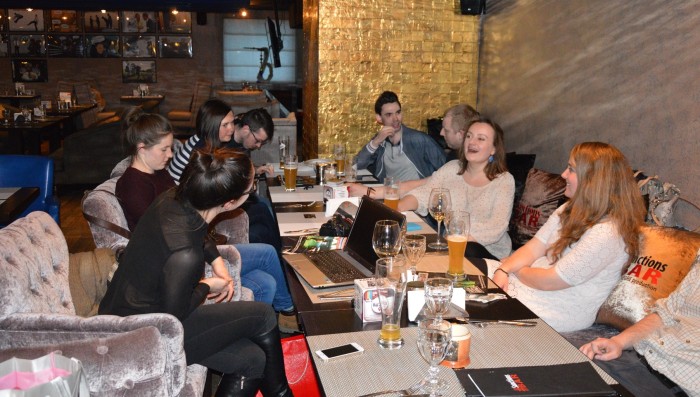 In all my years of living in New York I never managed to reconcile how some of the most grimiest-looking parts of town could house the hottest real estate and the most happening bars and clubs (I’m looking at you, SoHo and Meatpacking District). Looks like the pattern has traveled to Moscow. By day, Bolshoy Zlatoustinskiy Pereulok feels like the backwaters of central Moscow, with shabby building exteriors and barely any traffic, automotive or pedestrian alike. By night, crowds of attractive people are smoking outside of half a dozen bars/clubs that line a short stretch of the side-street right off of Maroseyka.

Bourbon Street was our first stop on Zlatoustinskiy. Casual bordering on grungy, it has the low-key vibe of an American dive bar. The drinks were basic but served fast, and offbeat decor had plenty of weird knick-knacks keep a curious eye entertained.

Propaganda is LEGENDARY in Moscow: it is that rare establishment that has survived almost two decades of Russia’s post-Soviet crises (it opened in 1997) and THE place to party for Moscow’s young, hip and beautiful. It was also a thematically-fitting stop on a pub crawl that started with Sanctions.

I’ve been told that once this restaurant/bar converts to a dance club closer to midnight it is virtually impossible to get in, so it’s a good thing that we were out a bit earlier in the evening. Or so we thought. If you do not have a table, you have to be a tall, gorgeous, impeccably attired gay man to get the attention of the most impossible-to-impress bartender, who gave me and my friend the MOST scrutinizing once-over and apparently was not pleased. Tow tall, gorgeous, impeccably attired gay men (I think they stepped out of a Gucci ad) who were already seated at the bar tried to get the drinks for us, but the barmen noticed the trick and gave even THEM a curt ‘Wait.’

We waited for another 5 minutes and then took off. I don’t care how cool a place is, I am too old for these games. I will come back for lunch though – the beer is cheap and the blinis are supposed to be fantastic! 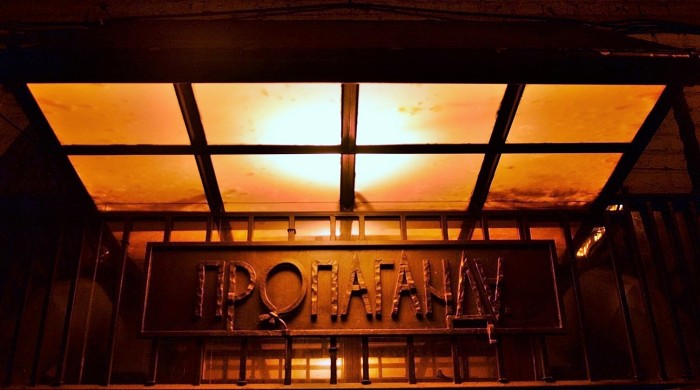 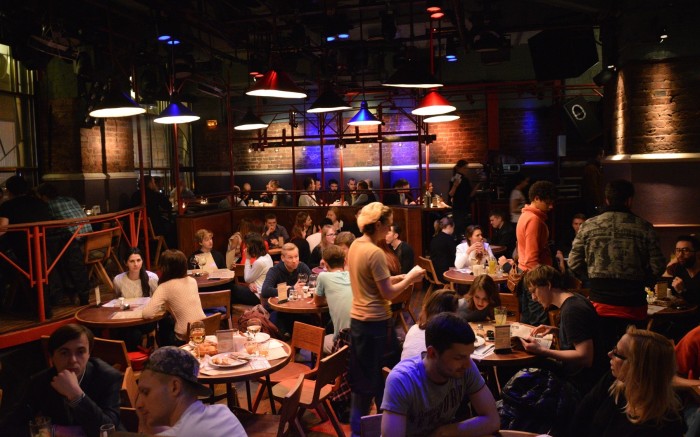 Now that’s what I’m talking about! The Standard Bar is next door to Propaganda, but miles away in terms of experience. It is more relaxed and grown-up. It is spacious, with plenty of tables and bar seating. Cool murals all over the walls. Friendly, chatty bartenders whipping up delicious original cocktails – always a big win with me. Also, The Standard does an official BRUNCH on Saturdays – something that has been sorely missing in my life since my New York days. Yes, this is the kind of place where I can happily stay put for an hour or three. 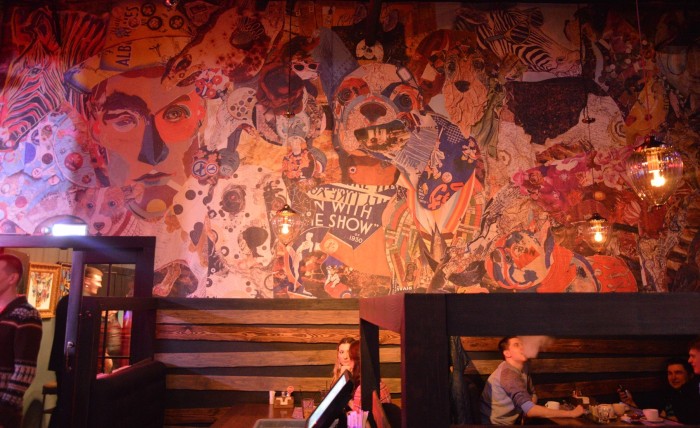 I have not gone dancing at a club in at least a couple of years when I finally made my way to Redaktsiya around midnight. Over-excited up from my first-ever pub crawl experience, I decided to go for it 110%. It was sweaty and crowded (have clubs always been like that and I hadn’t noticed till my old age?), and music wasn’t exactly my flavor (I prefer Hip-Hop/Pop to House), but the drinks were cheap and my friends were pumped, so the rest didn’t matter — we had a great time.

What a way to end the night! 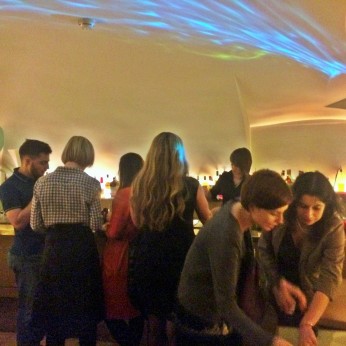 Do you have a memorable pub crawl experience?

37 thoughts on “MOSCOW DRINKS: MY FIRST EVER PUB CRAWL”